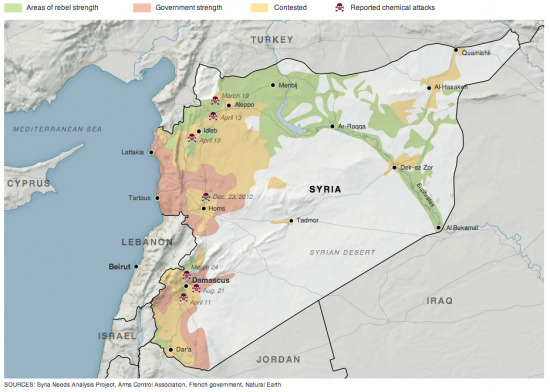 World War I marked the opening act of modern chemical warfare, and that conflict’s example was followed throughout the twentieth century by regimes from Benito Mussolini’s Italy to Saddam Hussein’s Iraq and, most recently, Bashar al-Assad's Syria.

The Chemical Weapons Convention, which prohibits the production and use of chemical weapons and requires the destruction of existing weapons, was opened for signatures in 1993. By the end of 1997, the year the treaty entered into force, more than 100 countries had ratified. Today, only seven countries, including Syria, remain outside the treaty.

Our full presentation gives more details on the role of chemical weapons in world history and international relations.

Alaska Senator Mark Begich, a Democrat, is in a tough race for reelection this year, and…

About the Data Mine

The Data Mine, CQ Roll Call's multimedia blog, features interactive visualizations of government and congressional data along with in-depth, policy-oriented analysis of the latest facts and figures.